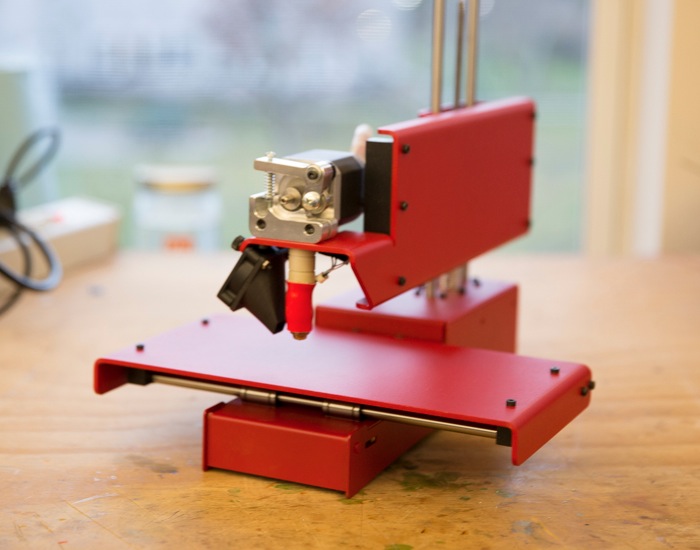 Tom and Jamie Mahoney are someÂ of our newer tenants here at the Pajama Factory and they’reÂ certainly involved with a lot of different things!

At the last First Friday, Tom was giving a demonstration of his new 3d printer, a device that lets you design a three dimensional model on a computer, then, with the push of a button, print it out!

Tom’s a big believer in what’s called the “Maker” movement, a world-wide movement of people taking “DIY” (Do It Yourself) to new heights. Â Wikipedia says it well:

‘Maker culture’ emphasizes learning-through-doingÂ in a social environment. Maker culture emphasizes informal, networked, peer-led, and shared learning motivated by fun and self-fulfillment.Â Maker culture encourages novel applications of technologies, and the exploration of intersections between traditionally separate domains and ways of working including metal-working, calligraphy, film making, and computer programming. Community interaction and knowledge sharing are often mediated through networked technologies, with websites and social media tools forming the basis of knowledge repositories and a central channel for information sharing and exchange of ideas, and focused through social meetings in shared spaces such as hackspaces. Maker culture has attracted the interest of educators concerned about studentsâ€™ disengagement from STEM subjects (science, technology, engineering and mathematics) in formal educational settings. Maker culture is seen as having the potential to contribute to a more participatory approach and create new pathways into topics that will make them more alive and relevant to learners.

As one of the basic tenets of the Maker movement is of sharing knowledge and spreading education through discovery, Tom is proposing a 3D Workshop, right here at the Pajama Factory:

We had a great turnout for Septembers First Friday event at the Pajama Factory! There was a ton of interest in 3d printing, and hopefully enough interest generated in the larger Maker movement to help produce some momentum.

There were more than a few questions about the cost of getting into 3d printing. Sharing theÂ price tag of aÂ Makerbot produced one of two reactions: â€œoh, thatâ€™s still way too expensiveâ€ or â€œthatâ€™s totally worth it!â€. There really werenâ€™t many in between.

For the way-too-expensive crowd, I offered that a good get-your-feet-wet printer can be built from a kit for around $350.

If the $350 option sounds appealing,Â I would be interested in hosting workshops at the PJ Factory where we build kit printers. I would suggest theÂ Printrbot simple makers kit in wood ($349) or metal ($549). Visit Printrbotâ€™s instruction page to familiarize yourself with the process.

Send me an email at tom@tommaho.com if youâ€™re interested!

Even if the idea of doing your own 3d printingÂ doesn’t fill your mind with ideas, but your the sort of person who loves tearing things apart to fix them, or just to see what makes them tick, plan on stopping by Tom and Jamie’s studio to see what they’re up to1