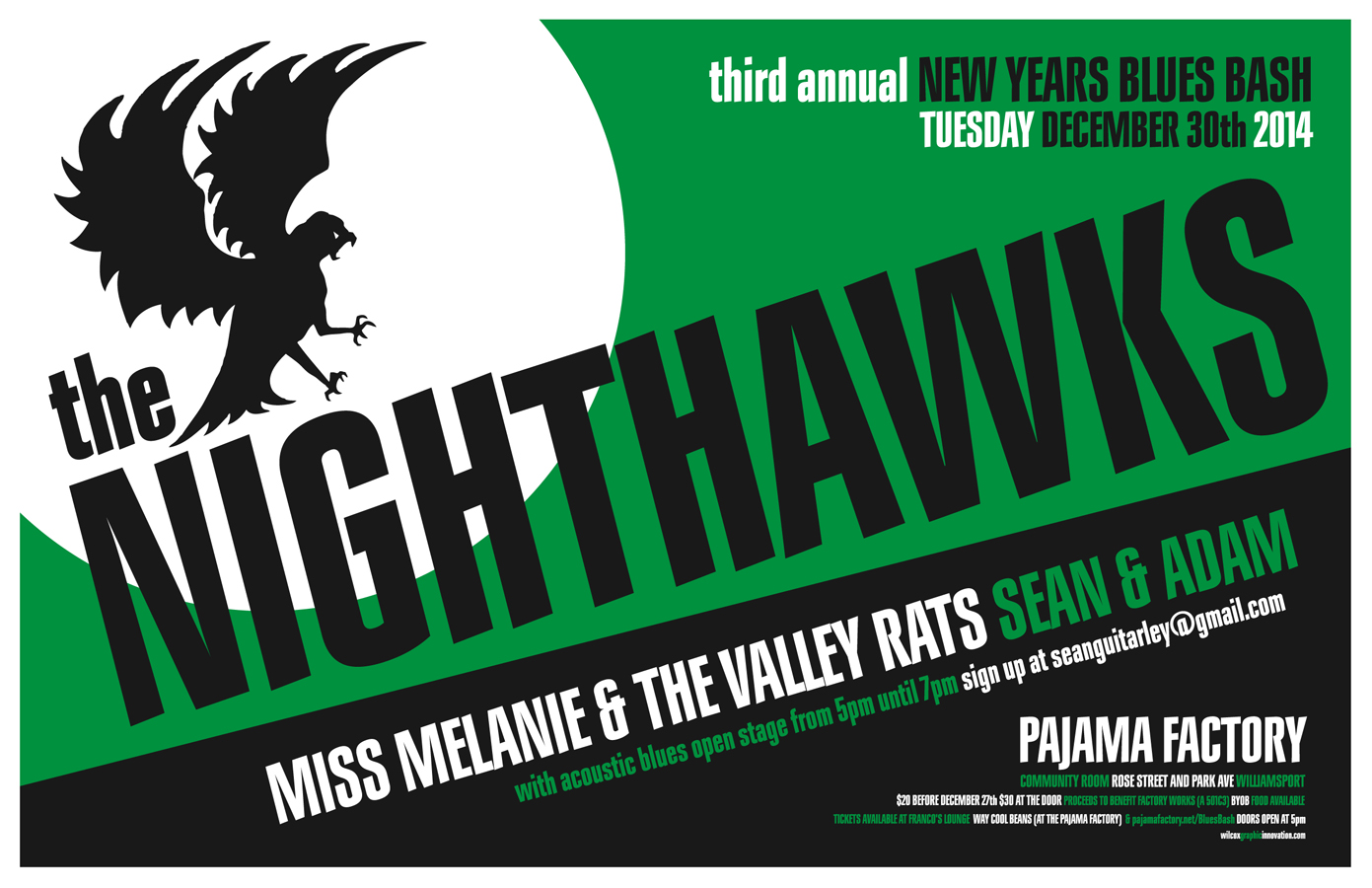 Tuesday December 30th â€” doors open at 5pm at the Community Room on the ground floor of the Pajama Factory.

Proceeds will benefit Factory Works, a nonprofit organization housed at the Pajama Factory.

MISS MELANIE AND THE VALLEY RATS

Specializing in all aspects of the blues, as well as performing roots, soul and New Orleans infused groovesâ€”Melanie Morrison Zeigler’s powerful, soulful, and sultry voice can whip a barroom dance floor into a frenzy or turn them quiet enough to hear a pin drop when serving up a soul bearing ballad. Her range and emotionality are as good as it gets. One listen and you are hooked! Combine her exquisite talent with the well-received Queen Bee & the Blue Hornet Band guitarist Mark Ross’ straight from the gut, honest, tone filled guitar playing for some infectious chemistry. Add to that the soulful, innovative, sympathetic stylings of organist Rev. James Harton and drummer Matt Zelenz. Watch out as they lay down the perfect groove-laden floor to express themselves.

When Mark Stutso, master of the deep groove, joined The Nighthawks at the beginning of 2010, the 21st-century version of the legendary American roots band was complete. With Paul Bell and Johnny Castle in the band for nearly a decade, and founding father Mark Wenner the remaining original, this team outshines all previous incarnations.

The current members of the Nighthawks bring decades of varied experience to the stage and studio. Paul Bell has played in many influential bands around the nationâ€™s Capital and is the consummate D.C. guitaristâ€”capable of soul scratching or country picking. Paul was less familiar with the classic Robert Lockwood/Louis Myers styles of Chicago blues playing than some of his predecessors, but it didnâ€™t take long for him to add those to his bag of tricks. When he plays a slow blues solo, you can hear a little of late D.C. picker Roy Buchanan, but without the tortured hysterics. Paul spent 10 years working with legendary blue-eyed soul man and keyboardist Tommy Lepson, who subbed for Mark Wenner on a number of dates this year while Mark recovered from open-heart surgery.

Johnny Castle started his D.C. career with Crank, popular early hard-rockers who opened for Jimi Hendrix. He spent journeyman time with Eddie and Martha Adcock in the heyday of D.C. Bluegrass, mixing comfortably with legends such as Bill Monroe and Ralph Stanley at festivals. After a stint with funk in an outfit called Spatz, he came through Tex Rabinowitz’s Bad Boys at the height of the Rockabilly revival, splitting off to form the psycho-billy band Switchblade. In 1984, Mark Wenner developed a repertoire of material with Switchblade and together they recorded Markâ€™s Fugitive â€“ a project that mixed hard rocking country classics with electric blues instrumentation (think Kentucky Headhunters). Live versions of some of those tunes can be heard on Mark’s compilation, Runs Good, Needs Paint. Before joining the Nighthawks, Johnny spent a decade recording and touring with diesel-billy legend Bill Kirchen.

Mark Stutso spent nearly two decades with former Nighthawk Jimmy Thackery. Before that he played in a number of big and small-time rock bands, including Ruffryderâ€”a spin-off of Black Oak Arkansasâ€”and Virginia Beach based Trix. Originally from deep in West Virginia and Southwest Virginia, Mark put in five years in the coal mines before escaping into his drum kit. He lives in Pittsburgh and has collaborated with the late Glenn Pavone and Norman Nardini. His vocals are a force to be reckoned with.

Blues Music Award Last Train to Bluesville was released on RipBang Records and won Acoustic Album of the Year at the Blues Foundationâ€™s Blues Music Awards in Memphis in May 2011.