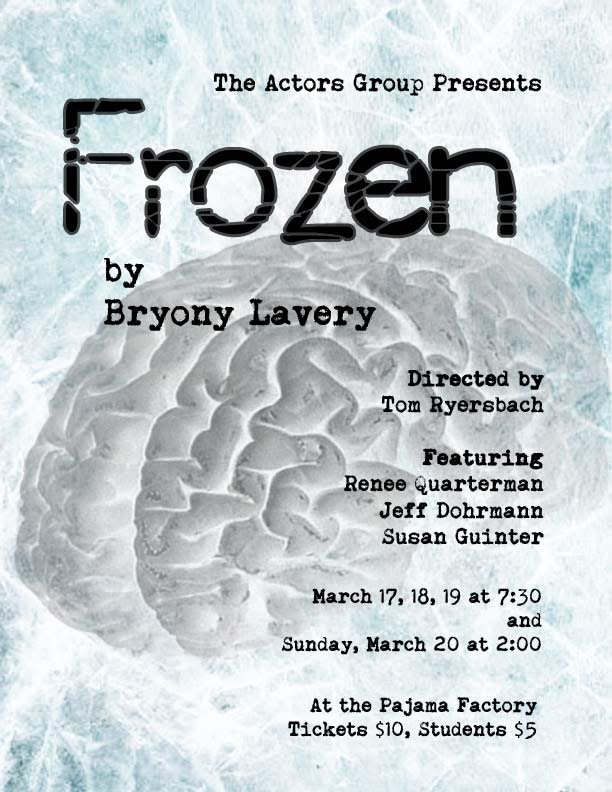 One evening ten-year old Rhona goes missing. Her mother, Nancy, retreats into a state of frozen hope.Â  Agnetha, an American academic, comes to England to research a thesis: “Serial Killing … AÂ Forgivable Act?” Ralph is a serial killer looking for “distraction”.Â  Drawn together by horrific circumstances, these three embark on a long, dark journey which finally curves upward into the light. Angry, humane, and compassionate, FROZEN is an extraordinary play that entwines the lives of a murderer, the mother of one of his victims and his psychologist to explore our capacity for forgiveness, remorse and change after an act that would seem to rule them out entirely.

The Actors Group, a local independent theatre company based in Williamsport and founded by Tom and Jeane Ryersbach, is comprised of very focused individuals devoted to the art and craft of acting.Â As a low-budget, no-frills company, its emphasis is on good work, interesting material, solid acting and expert direction. It tackles shows that ask hard questions, bring light to issues and make people think.Â The Actors Group is always looking to add new talent to its casting pool. Anyone who would like to join the group is invited to attend an audition, and once cast, that person becomes a member of the company.Â Hinging on the power of word-of-mouth, one will not find The Actors Group online; those interested should email tomjeane1@gmail.com.