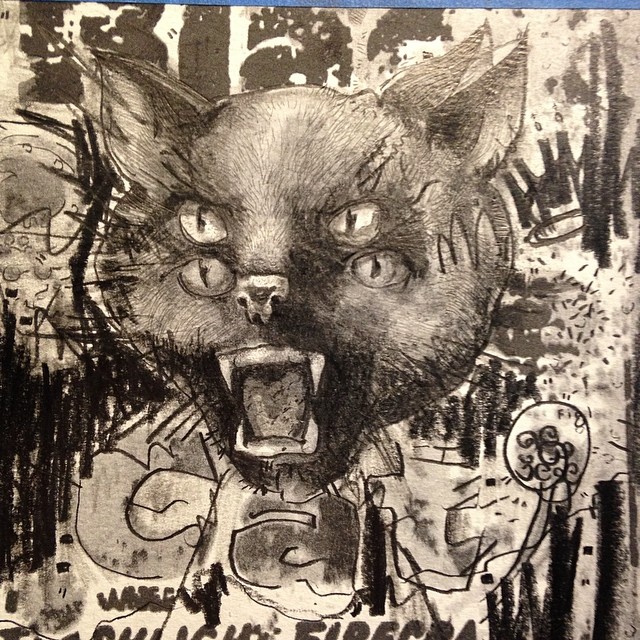 Join us for the opening reception of “Grey Matters,” a group exhibition of all graphite works by Factory tenants loosely referred to as the Graphite Gangâ€”Lawrence Miller, Chad Andrews, Andrew Norris, Jordan DeArment, Todd Rice, and David Becker.

Reception will take place in the Center for Creativity Gallery, 2nd floorâ€”Studio 10. Various First Friday activities will also be taking place throughout the Pajama Factory.

Lawrence Miller: “Trained as a painter, I worked many years as an illustrator while developing a personal visual vocabulary. Drawing is the foundation of these wanderings. The hand tries to make images, signs and symbols while the mind remains uncensored. Occasionally I’m almost satisfied with the result and the drawing survives.The nine 30×40 inch graphite drawings are larger than my usual fare. This is an intentional obstruction to habitual resolution.”

Chad Andrews grew up moving every two years for nearly 50% of his life. This constant change of environments is melded to Andrews’ persona and is manifested into his approach to making art. Andrews’ work constantly fluctuates with mediums, techniques, imagery and concepts and yet through all this change, he remains the constant. Andrews recent exhibitions present a variety of directions and ideas simultaneously. This manner of working feels right to him, in a way it is exactly the way he lives his life. Andrews lives on a horse farm, teaches at Bloomsburg University, and has a private studio practice at the Pajama Factory in Williamsport, PA. These three very different lives are one to him and are reflected in his artwork.

Andrew Norris is a self-taught artist who works predominantly in graphite. Traversing the seam of conscious and unconscious states, he works the ground from the deepest blacks to most delicate shading, to form intricate surrealistic compositions.

Jordan DeArment is a 24 year old artist from the Williamsport area where he shares an apartment with his cat, Yinn. Jordan lives with Asperger’s Syndrome, and while some might consider this a challenge, Jordan appreciates the unusual and creative ways his mind works, and he feels that this has greatly influenced his art. He specializes in fantasy art, with an affinity for dragons. Jordan competes in Special Olympics with the Lycoming County Equestrian Team, and he is also a long time volunteer at the Lycoming County SPCA. When he’s not busy drawing, he also enjoys camping and kayaking. You can visit Jordan in his studio, Dragon’s Lair Art, building 7, 4th floor, studio 7 at the Pajama Factory.

Todd Rice was born with a pencil in his handâ€”(his Mother still complains about that.) Mr. Rice has not created any “new” pieces for this show but has chosen instead to rest on his laurels (AKA: ass). All the pieces on display are from early to mid 90s, but have remained hidden from human eyes until now. Oooo â€¦ you’re so lucky!

David Becker: A recent series of events, or serendipitous happeningsâ€”including moving his photography business to the Pajama Factory and discoveries of his forgotten 30 year-old drawings after a pipe froze and burst in an attic where they were storedâ€”have re-inspired David to resume his graphite work. In this exhibit (all new works) he de-concentrates and opens up to spaces that leave much to the viewers imagination and challenges the veils and perceptions of reality through Zen and surreal compositions.

Image from the “Black Cat” series by Chad Andrews