Factory denizen Todd Rice is the subject of a new article over on Port Observer, a great looking new site focusing on our area. (Thanks for the tip, Matthew Parrish!)

On Facebook, artist Todd Rice often posts pictures of movie monsters — the Creature from the Black Lagoon, for example — encroaching upon scantily clad women frozen in horror or engaged in epic battles (King King verses a giant snake!). He has also shared amusing behind-the-scenes photos of a human dwarfing Godzilla simply by standing next to the surprisingly small, toy-sized creature, and Ultraman hugging his large, lizard-like foe. It’s the type of imagery one would expect and hope for from a guy who grew up spending his Friday and Saturday nights glued to the television watching old horror movies. 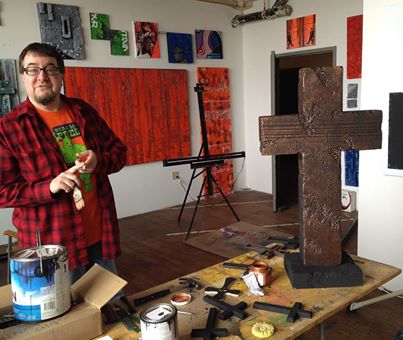 Stopped in to see what Todd Rice was up to and found him hard at work, painting crucifixes, having gotten inspired by some recent Springtime walks he took through the cemetery that overlooks the Pajama Factory